2016 is almost over, so it’s the perfect time to reflect on the most influential UX trends of the year. When you examine the most successful interaction designs, the clear winners are those who execute fundamentals flawlessly. Users’ expectations for a seamless, simple experience continue to grow—especially for products or services with complex functionality. Thus, it’s not surprising that trends are deeply focused on visual presentation and interactive experience.

This article from Adobe Creative Cloud Blog reviews some of the most important trends taking place in the industry. Access original article.

From flipping a light switch to liking a tweet on Twitter, we all perform tons of single-action tasks every day, usually without much thought. These simple moments of engagement are called microinteractions.

Flipping a light switch is a microinteraction. Credit: Smartdesignworldwide Download

Well-designed microinteractions can be defining because, despite their simplicity, they’re often very powerful. A button color change to indicate it’s been pressed, a sound indicating a new message in your inbox — microinteractions all add up for a more fulfilling user experience overall. Together with carefully placed animation they can significantly enhance a digital interaction.

Content-based navigation is based on stripping away distractions to keep a user’s focus on information, especially visuals. This kind of navigation works especially well with cards, because cards are a great way to organize and develop massive amounts of content in a way that’s easy to digest.

Since content-based navigation is a prime focus now, long scrolling has become an increasingly beneficial method for exploring content. Previously dismissed as a bad interaction pattern, the long scroll’s functionality on mobile devices has brought it widespread acceptance. Long scrolling simplifies navigation by eliminating the extra clicks necessary to reveal content and provides more potential to engage users. For discovery interfaces such as Pinterest-like feeds, where the user does not search for something specific so they need to see a large amount of items to find the one thing they like, scrolling provides even better usability than slicing up the text to several separate screens or pages.

The smaller the screen, the longer the scroll. Credit: Dmitry Mind Download

Flat design made a huge splash in the industry with the release of the Metro design language and it’s been steadily gaining a surprising amount of variation since then. Modern visual aesthetic is a result of moving towards flat design, and the latest “Flat Design 2.0” is the hybrid of the original flat design aesthetic and the layered feel of Material Design. As users’ preferences shift toward a simpler, minimalistic user interface, usage of fine fonts, striking colors and HD visuals get more common:

Type-centric design. Retina displays, together with great web type tools such as Google Fonts and Adobe Typekit, make the golden age of typography. Typography has a lot of benefits, but above all — it enhances the text content and helps you to create a visual hierarchy.

Vibrant colors. Color is a major part of flat design’s efficacy. Bright, energetic hues characterize many flat designs — they have strong impact on visual appeal and help UI elements like CTA buttons jump out from a page.

The blue “Sign up for free” call-to-action button stands out from everything else on the Dropbox’s homepage. Download

High resolution visuals. Powerful photography and rich graphics of flat design clarifies messaging by boiling down concepts into easily-understanding visuals and establish a stronger personal connection with a product.

Decision fatigue is a real concern in UI design. Studies have shown that having to make too many decisions has a negative impact on the ability to process information and increases the likelihood of error and frustration.

Design should be focused on anticipating user decisions in order to reduce cognitive load. Anticipatory design is a pattern that is based on idea, “Always aim to simplify tasks for users.” An anticipatory system bases its behavior on the user’s past and (probable) future choices: it’s simply creating a user experience that is customized for each user’s preferences and past behaviors.

Strictly speaking, the anticipatory functionality has been around for ages, however, a more intelligent implementation is turning it into a trendy UX design pattern. Modern anticipatory systems aim to limit options and streamline activity at the same time— with access to user data (browsing, purchase, search, etc.), the app can make informed decisions on the user’s behalf. For example, if users have previously made purchases from an online store, they may be presented with suggested items based on their shopping history.

Amazon suggests items based on your past purchase history. Download

Or the use of geolocation can be used to increase the level of personalization.

Auto-detection of location can save users time. Credit: Google Download

One of the best ways to create an engaging user experience is to use storytelling. Telling a story gets users engaged because it creates a UX that flows — a user is normally in the mindset of learning more about what the story has to offer and telling people this story adds depth to what might otherwise be just another product.

At the same time, a good story is visually and emotionally compelling. It establish empathy with the users and defines how users feel about the product. For example, the DNA project is a site that uses an introduction video to communicate the creative construction of a musician’s album. This interactive journey helps people get a richer understanding of the band’s vision and the actual people behind it.

Human beings are emotional creatures — emotion plays a significant role in our decision making — they guide every single decision we make. All experiences create emotions, whether or not you design for them, but emotional design consciously tries to create an emotional connection with the user.

Emotional design can be implemented in many different ways, one of the ways is creating a unique mascot for the product. For example, Duolingo’s Duo, a friendly owl who is meant to symbolize knowledge, wisdom and learning. Duo is involved in learning workflow and constantly tries to improve the experience of learning languages.

Duo perfectly mirrors the Duolingo’s traits, such as friendliness, simplicity and informality. Download

Mailchimp’s Freddie von Chimpenheimer is another great example of unique personality that stands for the product. This mascot works because Freddie often cracks jokes, and humor is an effective way to connect with people. This positive attitude will often lead to people sharing and even advocating for the product with their friends.

Freddie, the cartoon mascot of MailChimp, is a great emotion carrier for humor. Download

Siri and Google Now are just the beginning of speech-driven user experiences, but these modern voice interaction systems already prove that the technology is no longer in its infancy.

Voice interaction technologies are slowly but fundamentally changing the way users interact with an interface — instead of relying on touchscreens, mouse clicks, and keyboard commands, more users are gaining an appreciation for hands-free computing for everyday needs such as get weather forecast or get the food recipe.

Wearable devices are the hottest thing since the iPhone. They have been the most popular word in the tech industry throughout the year.

When creating user interfaces for wearables designers need to focus on simplicity and functionality, because you want to create a minimalist interaction-based interface which gives users the possibility to take an action or to make a decision at a glance.

Let’s take the Apple Watch as our key example of wearables. Designers should focus on the important UX principles of designing Watch apps, one of the most influential is KISS principle in design. Uber’s Apple Watch app is a shining example of such design. The watch version consists of one button that allows users to request a cab, and then the app notifies them when the driver is arriving. It’s simple, but it still gets the job done.

“You should message a business just the way you would message a friend,” said Mark Zuckerberg when he launched the Facebook Messenger Platform for bots. Chatbots have made huge progress recently and today, you can find chatbots in many sites or apps performing a variety of tasks — from giving customer support on Slack to ordering a pizza from Pizza Hut.

Why did chatbots become trendy? The answer is simple — they resemble real conversations. Chatting is very natural interaction to people since we primarily interact with each other through conversation. This makes the use of chatbots much more intuitive and easier than clicking on a bunch of buttons and navigating complex menus in user interfaces.

Nobody wants to navigate a complex series of menus to get something done. Conversation makes for a much easier experience.

Apps and other services are using this seemingly natural approach to make everyday tasks such as ordering food, calling a ride, or booking a hotel room as easy as sending a few text messages. Chatbots can also be designed to build a unique personal profile for each customer over time, enabling companies to deliver personalized service.

Recently, designers all over the world started to realize the importance of prototyping while creating digital products. Prototyping an app or site allows a development team to work through difficulties in a dynamic space. However, explaining how a UX idea will work through static set of images doesn’t always go over as planned.

Prototyping tools such as Adobe XD allow designers and developers to test out not only visual design, but actual interaction without committing to the complexity of full-scale development. They allow designers to create multiple states of a single screen, including animations, and transitions that were hard to represent through static screens. Using these tools, you actually give your images interactivity, and build the button-linked workflow of your whole app or website.

Adobe Experience Design allows you to go from wireframe to interactive prototype in seconds. Download

The main thing to keep in mind when considering UX trends is that UX now involves more than screens. Modern UX goes beyond on-screen design and into a world of functional pursuits. And what’s good about all trends mentioned in this article is that they push designers to find ways to maximize product experiences for everyone, no matter what device they’re using.

The loudest content medium out there has finally learned how to be quiet. Web design moved away from information overload to an aesthetic revolving around… 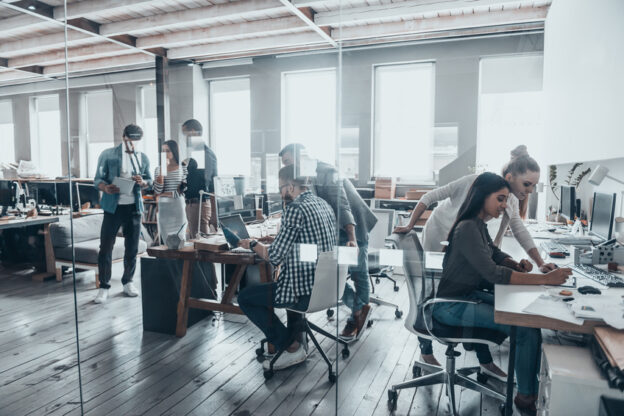 In today’s hyper-connected world, customers’ loyalty increasingly depends on your ability to design and deliver easy, emotionally engaging digital experiences. Not only are more consumers…

Digital Marketer author Josh Marsden wrote a fabulous article that sums up some of the product choices for key business automation tools for Email Marketing, Marketing Automation, CRM, and…